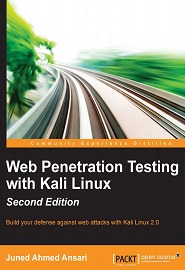 Описание: Kali Linux 2.0 is the new generation of the industry-leading BackTrack Linux penetration testing and security auditing Linux distribution. It contains several hundred tools aimed at various information security tasks such as penetration testing, forensics, and reverse engineering. At the beginning of the book, you will be introduced to the concepts of hacking and penetration testing and will get to know about the tools used in Kali Linux 2.0 that relate to web application hacking. Then, you will gain a deep understanding of SQL and command injection flaws and ways to exploit the flaws. Moving on, you will get to know more about scripting and input validation flaws, AJAX, and the security issues related to AJAX. At the end of the book, you will use an automated technique called fuzzing to be able to identify flaws in a web application. Finally, you will understand the web application vulnerabilities and the ways in which they can be exploited using the tools in Kali Linux 2.0.
What You Will Learn