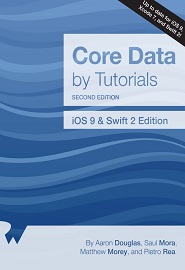 Описание: Learn Core Data with Swift! Take control of your data in iOS apps using Core Data, through a series of high quality hands-on tutorials. Start with with the basics like setting up your own Core Data Stack all the way to advanced topics like syncing with iCloud, migration, performance, multithreading, and more! By the end of this book, you’ll have hands-on experience with Core Data and will be ready to use it in your own apps.
Who This Book Is For:This book is for intermediate iOS developers who already know the basics of iOS and Swift development but want to learn how to use Core Data to save data in their apps.
Topics Covered in Core Data by Tutorials:

The iOS Tutorial Team takes pride in making sure each tutorial we write holds to the highest standards of quality. We want our tutorials to be well written, easy to follow, and fun. And we don’t want to just skim the surface of a subject – we want to really dig into it, so you can truly understand how it works and apply the knowledge directly in your own apps.