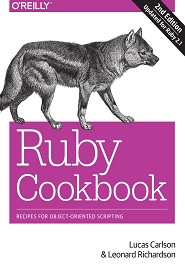 Описание: Why spend time on coding problems that others have already solved when you could be making real progress on your Ruby project? This updated cookbook provides more than 350 recipes for solving common problems, on topics ranging from basic data structures, classes, and objects, to web development, distributed programming, and multithreading.
Revised for Ruby 2.1, each recipe includes a discussion on why and how the solution works. You’ll find recipes suitable for all skill levels, from Ruby newbies to experts who need an occasional reference. With Ruby Cookbook, you’ll not only save time, but keep your brain percolating with new ideas as well.
Recipes cover: