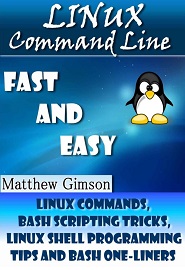 Описание: This book covers the Linux command line commands, Bash Scripting Tricks, Linux Shell Programming Tips and Bash One-liners. The book starts by explaining on the origin of Linux, the people behind its development and also the reason behind development of Linux. The commands for the Linux command line have been discussed. These range from the basic ones to the more complex ones. Once you have read this book, you will understand how to view the contents of files on the standard output, copy and move files while preserving the file permissions and as well as navigate through different directories via the command line. Searching is very important in Linux. The grep command used for searching in Linux has been explored in this book including its numerous option, thus, you will become an expert in this. Tail command, which is used for viewing and particularly the last parts of a file, has also been discussed. You will get to know how to update your system and adjust its date and time via the command line. The tricks behind bash scripting have also been discussed. These include brace expansion, command substitution, command history and loops. Shell scripting has also been discusses. You will be able to create an executable of a shell file and execute it via the command line. Variable, loops, case statement and decision making shell have been explored in detail.